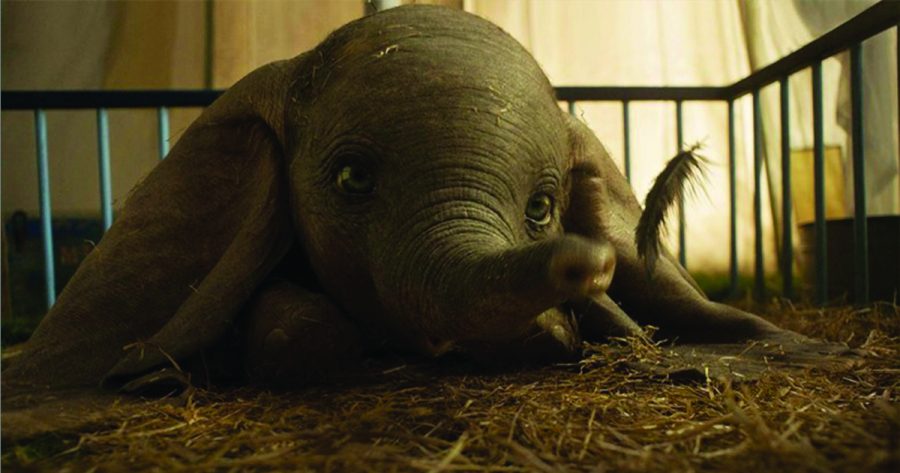 Admittedly, Disney’s live action renditions of their animated classics have not left a foul taste in my mouth; however, none of them have left a lasting impact. When Tim Burton was announced to direct ‘Dumbo,” I was skeptical, since his aesthetic did not seem the right choice for the flying elephant. While the film does a few things right, it manages to take it’s fair share of missteps.

Holt Farrier (Collin Farrell) is an amputated World War I veteran, returning from service to his traveling circus, where he rides horses. Coming home to his distant children, whom have recently lost their mother, he struggles to communicate with them. Upon finding out ring-leader Max Medici (Danny DeVito) sold his horses, the Farriers are left to care for an elephant that gives birth to the big-eared, flying Dumbo. Becoming an instant attraction, Dumbo’s fame manages to attract the attention of the villainous entrepreneur V.A. Vandevere (Michael Keaton), who wishes to tear the traveling circus up.

This film is more about the Holt family, than it is about the title character. I do not believe that remakes should be beat by beat copies of the original, but it felt as if this film was stretched thin or didn’t rely on the source material at certain points. I appreciate that Burton tackled this classic story in a different matter, but it ended up feeling flat. At times, it felt that the film forgot it’s own set of rules, where Dumbo suddenly became an intelligent animal and a superhero.

Colin Farrell’s performance is instantly forgettable and makes me wonder why his character was created. Whatever character development he had, felt lacking and uninspired. Michael Keaton feels like he’s just there to be there, he is a cheap villain who’s evil for the sake of being evil, but I cannot place blame on an actor’s performance, as it is the director’s job to bring the best performance out of his actors. Though Farrell is billed as a the leading man, his on screen offspring, portrayed by Nico Parker and Finley Hobbins, steal the show.

The kids were one the my favorite parts of the film, they showed a lot of heart and drove the story. Dumbo, fully CGI, is an incredibly adorable character that was instantly compatible with the children. Whatever scene Dumbo was in, it just felt so joyful and I felt like I didn’t get enough. What Burton is able to accomplish here is establish a juxtaposition between Dumbo and the children, who are both without a mother. Though Eva Green doesn’t show up until halfway through the film, I actually enjoyed her performance as a mystifying high flyer. Though the cinematography isn’t that great, there are some shots that really caught my eye.

Overall, the film is average at best, as it is noticeable that Burton stretched what he could from the animated classic. Visual and musical cues should be enough to satisfy fans of the original, as it brought me back to being a kid, watching the original ‘Dumbo’ on VHS.