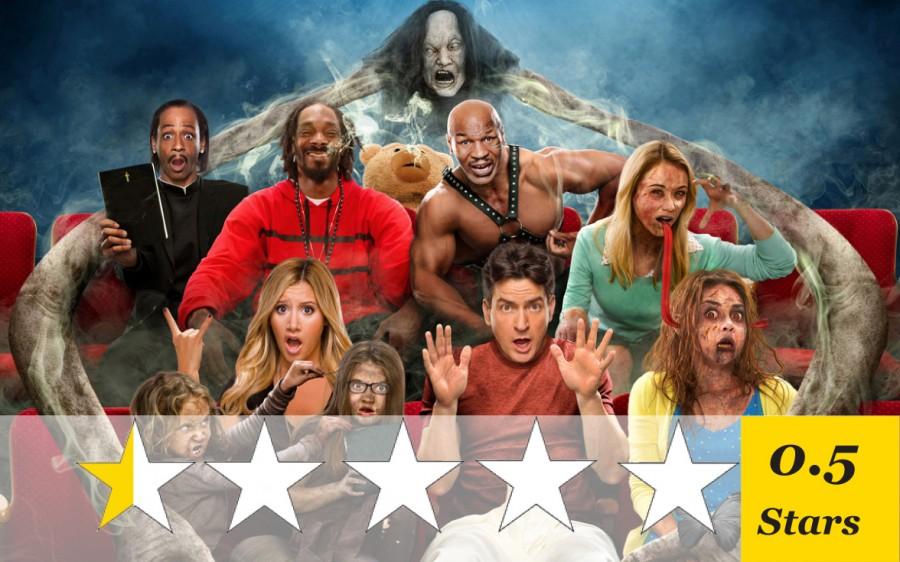 Holy flying monkey poop, Batman! Unfortunately, that is the nicest way to describe the latest installment of the Scary Movie series, directed by David Zucker and Malcolm D. Lee. With just as many cameos as all the other scary movie installments, Scary Movie 5 simply falls short in every sense of the word.
The first few minutes of the movie start with Charlie Sheen and Lindsey Lohan in bed together, a few jokes about Lindsey Lohan’s arrest record and a few about Charlie Sheen’s sexcapades. Sound familiar? We’ve heard all the Lindsey Lohan and Charlie Sheen jokes there are, though that doesn’t mean the celebrities won’t give us new lows to talk about; but that aside, Scary Movie 5’s humor is comparable to Lindsey Lohan’s career, a stagnant and questionable existence at best.
With spoofs from Paranormal Activity, Rise of the Planet of the Apes and Evil Dead, the movie has tons of material to work with. Whether it’s that everything has been done, or the jokes simply are not delivered, is kind of difficult to tell. What is certain is that not a chuckle was heard throughout the theater as the audience watched the 85-minute attempt at another Scary Movie title.
As bad as it sounds, not all hope is lost. Cameos by Darrell Hammond, Snoop Lion, Heather Locklear, Mike Tyson, and Terry Crews help ten minutes of this movie, making it just bearable enough to consider the ten dollars spent to see it. While the movie does deserve some props for the cameos, everything else about it falls flatter than the washboard torso of a preteen boy’s middle school crush.
While the Scary Movie franchise was never meant to be high quality cinema, after all it’s just a spoof on other movies; that is no excuse for the new lows Scary Movie 5 has managed to reach. Audiences who want to see a good Scary Movie should simply stick to the original two that starred the adorable Anna Ferris and were directed by the Wayan brothers.