Leo Burnett to NEIU: Do What You Can’t 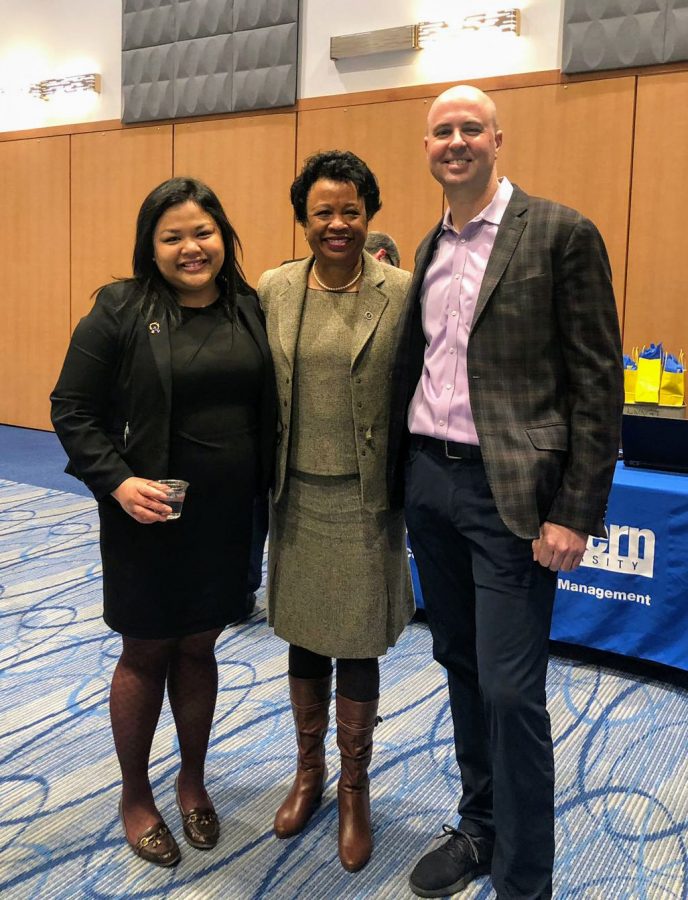 The CEO of Leo Burnett Group, Andrew Swinand, kicked off the 18th International Business Conference this year with a talk titled “Building Global Brands,” in which he used Samsung as a case study. He explained the conception of the #DoWhatYouCant campaign as the brand’s philosophy, shared a bit about his humble beginnings from Jersey to Chicago and ended with some key advice on what it takes to succeed in advertising. The motivational lecture showcased four captivating commercials that were aesthetically pleasing and nothing short of what one could expect from a globally successful advertising agency.

The #DoWhatYouCant philosophy is about defying barriers. It is a successful ad campaign for Samsung as it competes with the iPhone, whose commercials focus on the product features while Samsung commercials focus on how its features will allow you to execute creative solutions to everyday problems. At its conception, the campaign aimed to target Millennials as “joyful pioneers,” but the human centric storylines evoke emotional reactions from all generations. The perfect example of this would be the final video he showed called “Human Nature,” where Millennials and Generation Z characters are seen breaking stereotypes and overcoming limitations in spite of what others were saying and then ended with the words, “We are born to do what can’t be done. Do what you can’t.”

Toddlers are typically encouraged to bravely take those first steps or jump in the water. As we grow into young adulthood, somewhere along the line, there becomes a discord with the environment whether it is at home, academia, sports or social media. We are suddenly told by society the things we cannot do or should be doing instead. And it is not always in the nicest way either. Self-efficacy is an important quality to have no matter what endeavor you choose to embark on. It is the ability to tune out negative self-talk because it is inevitable that you will experience some doubt, face some setbacks, and hear a lot of noise. But it is entirely up to you to know what you think, feel, believe, and need deep down. That is self-efficacy, the ability to get back up whenever you get pushed down, whether by your own doing or anything out there in the world.

Every generation is meant to be better than the previous in order for the human race to continue evolving. For a generation that is ever more capable, vastly informed and globally connected, Leo Burnett Group continues to strive towards understanding people better than anyone else and this becomes apparent in the #DoWhatYouCant ad campaign for Samsung.

As president of the CEO and AMA clubs, I was fortunate to be part of the planning committee for the International Business Conference hosted by Northeastern Illinois University’s College of Business and Management. I conveyed to Andrew, “The ‘Human Nature’ Samsung commercial has been my 1 minute and 30 second morale booster ever since it came out. The entire #DoWhatYouCant campaign by Leo Burnett is just so relatable to today’s generation, worldwide. I would be so grateful to hear you speak to our business and marketing students at the IBC conference.” I remain grateful for the time he put into visiting NEIU and addressing the minds of aspiring professionals. When I introduced him, I told the audience, “I wanted to share this with my peers because the tagline of IBC is ‘Start here. Go global.’ It’s important to know that no matter where we choose to begin and eventually end up, it helps to believe that you can do it.”

Leo Burnett Group is one of the oldest and largest advertising agencies with its headquarters located on 35 W. Wacker Drive, employing roughly 1,800 employees known as “burnetters.” The Leo Burnett Building has been a notable part of Chicago’s skyline as much as the Leo Burnett name in the advertising industry. Andrew wrapped up his lecture with some inspiring advice on his four keys to success in advertising: Curiosity, Collaboration, Communication, and Creativity.