Going to the “Source” 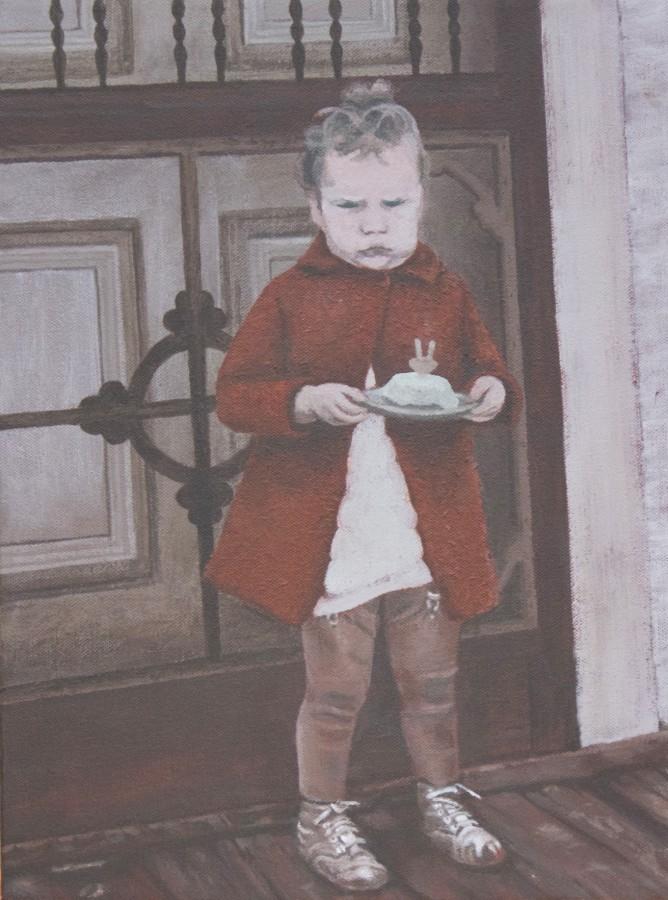 Some family snapshots are simply kept in boxes or albums, memories that are seldom viewed or revisited. In Source, the Senior art show for Lisa Beiwel, looking through photos of her mother’s family gave her “a window into another time,” and a better understanding of who she is. “My family is my source in so many ways – biologically, spiritually, socially,” said Beiwel.
According to Beiwel’s artist statement, “The aesthetics of past decades delight me – the clothing styles, the palettes, the craftsmanship, etc. When the people in the photos are relatives; these images become even more dear.” This becomes all the more evident in the treatment of the paintings. Source features six paintings, all recreated in near-photo realism from old family snapshots from the 1940s and 1950s. Working from copies of black and white photos, Beiwel worked to create the appropriate palettes for the time period in muted and somewhat sepia tones, reminiscent of hand-coloration treatments of photographs in the late 19th century.
In “Marian in Front of Saetersdal,” Beiwel’s mother, Marian Biel, stands as a young girl in a dusty rose dress in front of a church, captured with glee and titillation written on her face and gestures. In another painting, entitled “Second Birthday at Naptime,” two-year-old Marian pouts in a bright red coat as she is handed a tiny birthday cake that she is simply too sleepy to appreciate.
The paintings depict the childhood of Beiwel’s mother, and the small southeast Minnesota community she grew up in. They revolve around the simple pleasures of being with family, highlighting moments such as confirmation, birthdays and family gatherings. The local country church,Saetersdal Lutheran, figures prominently in several of the paintings. The church does not necessarily advocate for any one faith, Beiwel explained, but rather stands as a symbol of deep spirituality, having served as both a religious focal point and the center of the small community’s social life. “My mother went to Saetersdal, my mother’s family went, and I went to bible school there when I was a little girl,” said Beiwel. “I was also baptized there,” she continued on to say. The crisp reductionist treatment of the buildings depicted in the background of her paintings recall the architecturally-focused paintings of Charles Sheeler, one of Beiwel’s favorite artists.
Before starting the Source series, Beiwel said she “hadn’t really found her niche” or a genre she really felt comfortable painting in. She didn’t feel drawn to paint outside of class, and just painted the assignments as they were assigned. But upon starting the painting that was to become “Marian in Front of Saetersdal,” Beiwel found inspiration and a renewed interest in her family history. “Working with family photos was really gratifying. I found myself making progress …really improving my skills.” Beiwel also expressed great appreciation for the help and input she received at NEIU. “The teachers here have been really generous with their time and help, especially Mary Porterfield,” said Beiwel. She plans to continue working with family photos, this time from her father’s side of the family.
Beiwel’s mother is currently in her 70’s and excited about the series, according to Beiwel. “She’s only seen one of the paintings,” said Beiwel. “My mother is coming to the reception to see [her childhood].”
Lisa Beiwel’s show, Source, is located on the second floor of the Fine Arts building, across from room 225C. Source runs from April 15 – 29, 2013. The reception is on April 26, 6-9pm. For more information, please contact her at [hide_email [email protected]]