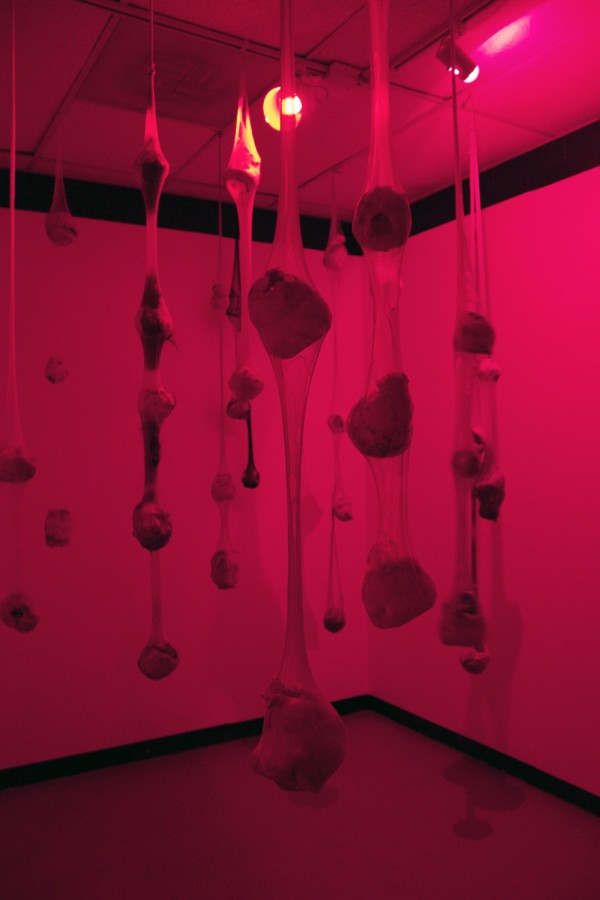 The Baby is 87. The Mommy is 28 is an experience open to students located inside the door of FA 217. - Photo by Emily Haddad

The sign says to enter and shut the door behind you. A shredded length of pantyhose with several irregularly-shaped hollow clay balls dangle beside the quaint flower-wallpaper covering the door of FA 217 offers virtually no preparation or insight as to what awaits the viewer inside. Opening the door subjects you to soft female moans and a dark room illuminated with dim red light. From floor to ceiling the room’s space is filled with similar lengths of clay ball-filled pantyhose, transformed into dripping organic shapes by the darkness and shadows cast by the pantyhose as the door closes behind you.
“The initial reaction to [The Baby is 87. The Mommy is 28] has varied from Mark McKernin calling it creepy, to students and teachers thinking the space is cool and wanting to stay here – one teacher said she wanted to come back every day,” said Alison Greer, senior Art student and creator of The Baby is 87. The Mommy is 28. “Some people freak out, some people love it.”
The artist’s statement, hard to locate and harder to read in the dim red light tells the story of an elderly woman’s slow descent into Alzheimer’s and bodily infirmity. The moaning is described as a constant unconscious behavior that the woman is not aware of at this stage in Alzheimer’s.
Referring her as Yetta, Greer has been a caretaker for this woman whose moans are audible every few seconds during the experience for the past 5 years. “Being with Yetta has been the longest relationship of my adult life,” said Greer. Indeed, two of the only intelligible things Yetta says to Greer on the recorded track of her voice are “You’re the only friend I have” and “I love you so much.” The installation is about Yetta’s perceived journey toward death through Greer’s eyes. “It’s so strange how we come into this world helpless and wear diapers, and then we go out the same way,” said Greer. The very name of the installation references a striking phrase Yetta once said to Greer, “I’m the baby, you’re the mommy!”
The installation tells a visual story of decay and disintegration.”I’m fascinated with human hair and reusing intimate objects, repurposing them. I believe things like used pantyhose have an energy to them after being on someone’s body. Hair even more so.” said Greer. The space destabilizes a viewer’s sense of space and awareness with the darkness and dangling clay balls that move freely during exploration. Viewers are expected to navigate through with very little outside explanation. “The balls were a meditative creation process, hollowing out ball after ball. “
Greer purposely made the artist statement difficult to read by placing it inside of the installation in order to let viewers have their own experience and come to their own conclusions about what the space means to them. “My art is driven by my experiences, but I want people to interpret it and have their own experiences,” said Greer.
Greer seems fond of shocking Northeastern Illinois University (NEIU). Her past installation piece, “Human Hair Show;” in FA 217 during the summer of 2012 was a conceptual piece involving a lawn chair in the middle of large piles of human hair. “While it’s on our head hair is beautiful, but once it’s cut off, it’s considered dirty. People came up to me disgusted, saying ‘I can’t believe you touched that [hair] with your bare hands!’”
The Baby is 87. The Mommy is 28 will be on display on the second floor of the Fine Arts building in room FA 217 from April 15 – 29, 2013.