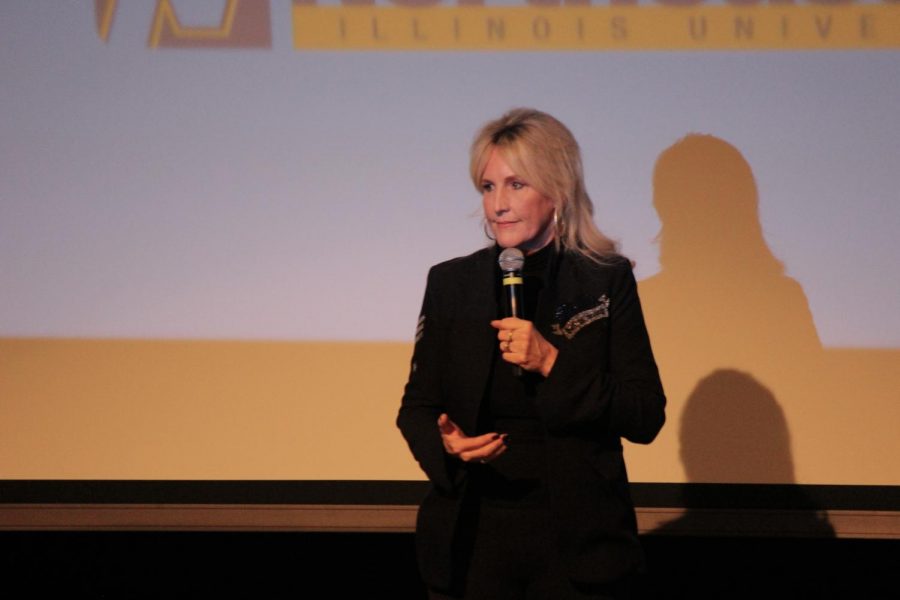 Erin Brockovich talking during "Evening with Brockovich" on Feb. 25.

On NEIU’s main campus, the auditorium was filled with people from the university and the community waiting to hear environmental activist, Erin Brockovich, talk about her career and life for the fifth installation of the Daniel L. Goodwin Distinguished Lecture series. Chatters from people of all ages could be heard about Brockovich’s career and the film made about her.

Brockovich received national attention after leading an investigation which discovered the Pacific Gas and Electric company had been poisoning water in Hinkley, a small town in California, for more than 30 years. The Hinkley townsfolk suffered major health problems due to the water contamination.

“Part of our responsibility as an institution of higher education, is to be a hub for intellectual discourse. This is the spirit behind the Goodwin Distinguished Lectureship series. Whether it’s about politics, science, education, world events, the arts, business or the environment, we have a people and we are the place to have these healthy discussions,” Gibson said.

Gibson closed her introductory speech by introducing Daniel L. Goodwin, who spoke about the importance of free speech. “We are challenging the students and the community intellectually to debate issues and to not be afraid of any issues and not bar any particular type of speaker. Our speakers are carefully chosen, and they’re chosen to represent various points of views on topical interests. I think that’s what the university is all about; the citadel of free thinking and free speech. Totally free speech, unedited, unencumbered and unlimited.”

Brockovich walked onto stage with a smile and said, “Hi, oh, you know, I start with a joke: I’m Erin Brockovich, not Julia Roberts, sorry if anyone is disappointed.”

This joke made the audience laugh. Brockovich talked about how she’s “one of you,” because of her humble beginnings and work with the community.

Brockovich said that the film came out twenty years ago, “ I want to share with you that the film created a lot of confusion, which I had no idea was going to happen.”

Brockovich explained that even to this day, she can go into the grocery store and people don’t believe that she’s the real Erin Brockovich because they thought the film was about a fictional character.

Brockovich started with her upbringing because “to start looking at the future, you have to go back in time,” she said.

She shared with the audience about her dyslexia; how she was labeled, judged and perceived a different way because of it. However, she found that there were two people in her life, her teacher named Kathy Borseth and her mother, that unlocked the key to her success because they took the time to help her succeed in a different way, “because what is normal?” Brockovich asked.

Her mother, a journalist, teacher and sociology major would tell her, “You just need to find your sticktoitiveness.”

Young Brockovich didn’t understand the word but the more mature Brockovich does. “I’m 58-years-old and it feels strange talking about a simple, yet underused word that is really significant, that impacted me then and continues to impact me today… And sticktoitiveness is the word. It’s definition? Noun, propensity to follow through in a determined manner, dogged, persistence, born of obligation and stubbornness.”

Another anecdote Brockovich shared was the time she was caught in a lie to her father as a teenager. Her parents punished her and told her she couldn’t go to her very first trip to Chicago, “I was so mad, I’m not kidding you, I shook a baby tree out of the backyard,” Brockovich said.

She then read a letter that her father wrote to her during this time, which explained her father’s reasoning why being transparent is so important. She said he even enclosed a news clipping of Jimmy Carter’s take on lying in the letter.

Brockovich explained that these two anecdotes were driving forces behind her determination to maintain transparency and keep asking questions. “I can’t stand here and tell you that I ever did any of this by myself. It took all of us to make it happen. It took the judicial system, it took the community, it took their courage, it took me, countless staff to all come together and be on the same page and that’s how and why Hinkley happened. We worked in conjunction and together,” Brockovich said.

“Guess what, superman’s not coming. But here’s the great thing: you’re here, and you’re here and you’re here, stop looking for the hero and become the hero, find that courage inside of yourself. You want things to change? Start right here with you,” Brockovich said.

Leverage was how many people she was able to get to get on the cause, “leveraging the people, leveraging your community, that collective voice is powerful,” said Brockovich.

Loyalty, Brockovich shared, is all about being loyal to each other, their passions, their health and their causes. Lastly, love, according to Brockovich, is about loving yourself, family, community, home, country and freedom.

Brockovich then showed a powerpoint presentation with screenshots of her heat map of disease clusters and contaminated water across the United States. The self-reporting map is located on her website and is free. Because of this map, Brockovich was able to meet with the United States Government to begin a national registry, similar to her map, which would track the migratory patterns of cancer and disease clusters across the United States. According to Brockovich, the Trump administration has allocated $1 million toward the registry, but are still waiting on the funds.

NEIU senior, Sara Jackson, said the Erin Brockovich lecture was “very informative on how to get involved in water systems and how sometimes the government isn’t transparent.”