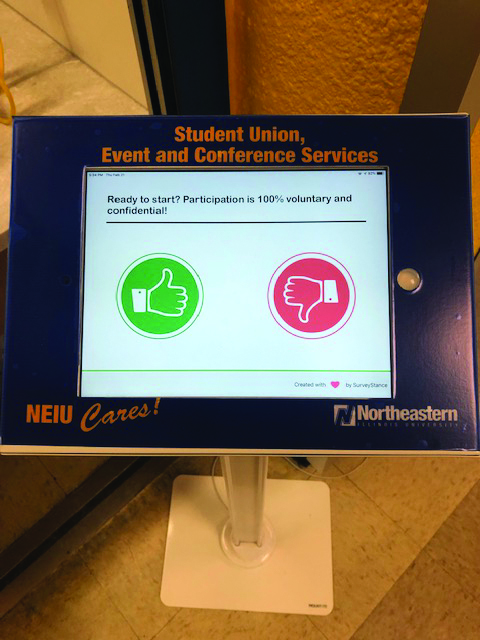 Photo of the kiosk screen at the Welcome Desk on NEIU's main campus.

The program, which had been in the works since the fall semester of last year, began with wanting to get a sense of student interactions with departments. The Division Student’s Affair initiative is through Vice President Lopez, who created a committee led by Doug Lawson, director of Student Disability Services.

Kyle Burke, director of Student Union, Event & Conference Services, is also part of the committee. “We wanted these to be super quick interactions. We all know people get survey fatigue, we all know people will stop taking the survey if it is too long. I was at the post office one day and as I was leaving there was a little kiosk that was like ‘How was your experience?’ and you just touched one of the emojis.

“And I was like, that is pretty much what we need, just some sort of device where people will take a quick- less than 30 seconds- basic feedback… It is important for various reasons, we wanted anonymity, we didn’t want enough to identify unless they wanted too,” said Burke.

There are 10 survey kiosks throughout the main campus at all of the main student affairs offices including student leadership development, career counseling, health services, the welcome desk, the nest and the Pedroso Center.

Doug Lawson, director of Student Disability Services, said, “This kiosk is attempting to measure the experience students have when interacting with the various DSA offices. Later in the semester we will be rolling out our Student Satisfaction Survey to go even deeper into the student experience when using Student Affairs services/programs.”

The survey kiosk welcomes students with: “Ready to start? Participation is 100% voluntary and confidential!” The instructions then ask students to choose a thumbs up or thumbs down. Picking between emojis that represent “terrible,” “bad,” “good” and “excellent,” students answer how their interaction with the staff from that department went that day.

Questions also include if the staff was able to assist in a professional manner and if the student felt like they were helped. The survey also gives students the phone number for the Student Affairs direct line should they need further assistance.

As of Feb. 21, 596 surveys have been completed. According to Lawson, over 80 percent of the data that has been measured has been positive.

The “pilot program” as referred to by Burke, will run through the end of this semester in hopes of setting a baseline of data. “It is a pilot program of will students interact with us and talk to us?” Burke said, “We want students to feel that their voices are heard.”

Lawson says the program is a starting point to find ways to move forward. He says, “We will use spring 2019 semester as a baseline for our data. We don’t know what numbers we will get. We’ve never done this type of survey before. Once the semester is over. We will suspend the program over summer to see what the data is telling us. We will pair it with the Student Satisfaction Survey we are rolling out.”

The kiosks, however, aren’t free. According to Burke, each kiosk cost $45 per month to maintain. Regarding where the money for the rentals came from, Lawson said, “Each Director from each Student Affair department had to allocate money from our respective budgets toward the rentals; to show our commitment to this program.”

The survey kiosks aren’t the only ones that will be installed at NEIU. Lawson said there are future plans to bring more opportunity for student feedback. He says, “Also, there are a couple other surveys coming out from other departments in other divisions as well. In the fall 2019, NEIU will have the University Campus Climate survey as well. All this data will help us form a better conversation within the Division of Student Affairs and from there we discuss what changes need be made. We will re-roll it out in Fall 2019 to see if the changes we’ve implemented had the desired effect.”