UGC Struts Their Stuff at Step’n’Stroll 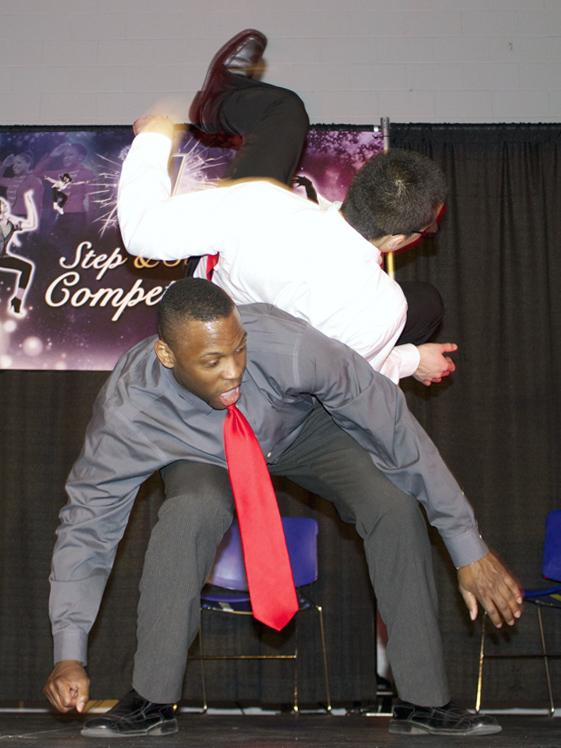 The entire show held on Friday, April 12th was truly spectacular. Each group delivered a unique, captivating performance. Owning the stage first were four Omega Phi Beta ladies, dressed in black from head to toe. In one particular sequence, they really got the crowd hyped by chanting the line, made popular by news interviewee Sweet Brown, “Ain’t nobody got time for that.” NEIU graduating senior and head of NEIU’s Omega Phi Beta chapter, Ruthy Venegas chartered the sorority at NEIU three years ago. Nationally, the sorority’s philanthropy focuses on stopping violence against women, but the NEIU chapter exclusively focuses on teen suicide and self-mutilation prevention.

Next on stage were four sharply dressed gentlemen from the fraternity Omega Delta Phi, the second place winners. In black suits and silky red ties, these guys turned up the heat with their extra smooth strolls and spry steps. NEIU senior in business management Denny Esquivel, is the co-founder and current President of NEIU’s chapter of Omega Delta Phi, chartered on April 16, 2010. It currently has 22 members. The fraternity’s philanthropy is CASA, Court Appointed Special Advocates, for children.

Responding to the event as a whole, Esquivel said, “This should be an annual event from here on out. We, as Greeks, want to promote ourselves as something else from what the media portrays us to be. We want to show creativity and teamwork, and being in healthy competition is always fun. Events like these can attract many people to our campus as well.”

Third-place winners Delta Tau Lambda Sorority, Inc., Kappa Chapter, were the third group of performers. Wearing the sorority’s signature brown and gold colors, the five ladies delivered an in-sync, dynamic show, seasoned with their high-pitched sister call, “Dee Vee!!!” They had spent a little under two months preparing their routine, practicing about once a week, if not more.

Chartered in spring 2010, the NEIU chapter of Delta Tau Lambda focuses on youth development and supporting the causes of HIV/AIDS, diabetes, breast cancer and mental health. Senior NEIU social work major Anays Antongiorgi is the chapter’s founder and current vice president. The chapter states that the event “was a great stride by SLD and the Greeks at NEIU to bring awareness to Greek life on campus. UGC should host another.”

Although they don’t yet have a chapter at NEIU, the dazzling first-place winners of Gamma Alpha Omega Sorority, Inc., didn’t let that stop them from stealing the show. They brought together sorors from a few of their Wisconsin chapters, namely, UW Oshkosh, Whitewater and Milwaukee. Because most of the participants were coming from out of town, the group planned accordingly and began practicing in late January and consistently throughout the following months. NEIU junior and history major Daisy Saenz has been a member of Gamma Alpha Omega for two years, and she is thus far the sole member of the sorority at NEIU. The sorority’s philanthropy is in education and mentoring youth.

All participating chapters agreed that the event was a success. According to Ian Stroud, interim assistant director for the office of Student Leadership Development, the Step ‘N’ Stroll Competition would not have happened without the vision, planning and motivation of Bilal Badruddin, the graduate intern for Student Leadership Development. Stroud commented, “He really took the initiative to organize the event from start to finish.”

A graduate student in higher education at Loyola University-Chicago and member of the south-Asian interest fraternity Delta Epsilon Psi, Badruddin has been working closely all year with Stroud and the UGC. Regarding the Step ‘N’ Stroll Competition, he said, “Thank you and congrats to all the teams. Honestly, I think that this show can get bigger and better. Although I won’t be here, I know that, in the future, if UGC really comes together and works together, I think that this can be even better. This is the stepping stone for future step ‘n’ stroll competitions.” Badruddin is graduating from Loyola in May.