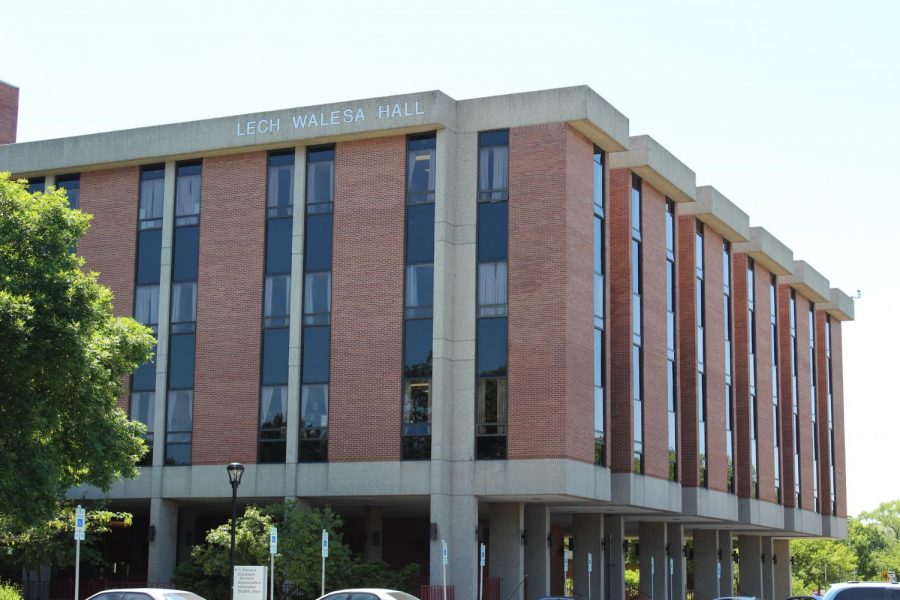 Lech Walesa Hall (LWH), located on NEIU’s main campus, was named in honor of Polish politician and Noble Prize winner Lech Walesa in 2009 for his part in the Solidarity movement in Communist Poland and dedication to the rights of workers.

Walesa made homophobic comments at a political rally in 2000. He described gay people as “sick” and said, “I believe those people need medical treatment.” He also stated LGBTQ people should have no place in politics. While speaking on Polish Television in 2013, he said LGBTQ people must “…know that they are a minority and must adjust to smaller things.”

NEIU’s LWH is where the political science and social justice classes are held. Sociology professor Christine Jenkins said, “It is the president’s responsibility to focus on a large number of issues that affect students. That doesn’t mean that this issue should be ignored. Students and faculty have made it clear they do not support someone who’s words belittle a large part of the student body. As an administration we need to heat student’s concerns and not dismiss how they feel. We need to make sure they feel safe and welcome at NEIU.”

When asked if she has concerns about teaching sociology classes in LWH Jenkins said, “It’s a contradiction that sociology classes are taught in this building. The sociology department’s core mission is to explore diversity and inequality, and much of what we teach he (Walesa) is in opposition of.”

Former NEIU President Sharon Hahs, who stated Walesa’s name is synonymous with freedom, overturned the University Advisory Council’s unanimous vote to change the name. Despite hope from some faculty and students, current NEIU President, Dr. Gloria J. Gibson, has not made any efforts to address or change the building’s name.

Gibson said in a recent statement to the Independent that she “needs to better understand the complexities of the issue before taking any action.”

According to Director of Strategic Communications, Mike Hines, Gibson is currently focusing on “reversing a declining trend in enrollment, managing our budget realities and fundraising for student scholarships.”

Jae Kim, a junior majoring in CMT, said, “In light of the reality of low enrollment rate to the school, I can understand why the issue hasn’t been addressed. But it is a very weak excuse because this is an opportunity for NEIU to be known as an ally to any oppressed groups. The school can attract more students from all over the world as a safe and welcoming school that embraces all cultures and backgrounds.”

In response to the idea that Walesa’s past good deeds excuse his current actions, Chris Zavaleta, a senior marketing major, said, “Past glory doesn’t excuse future mistakes. Just because he has done good doesn’t excuse what he said.”

The external NEIU community also doesn’t stand for the homophobic comments. The Office of Alderwoman Margaret Laurino of the 39th Ward said, “There is no place in the 39th Ward for intolerance against the LGBTQ community or anyone else- this is the birthplace of ‘Hate has No Home Here’.”

As of now there are no plans to change the name of Lech Walesa Hall. Hines said, “she (Gibson)  has been talking about the issue with many members of the University community, and those conversations have been helpful to her in understanding perspectives and points of view.”