Nike Just Did It: A response to Nike’s ‘Believe in Something’ Commercial 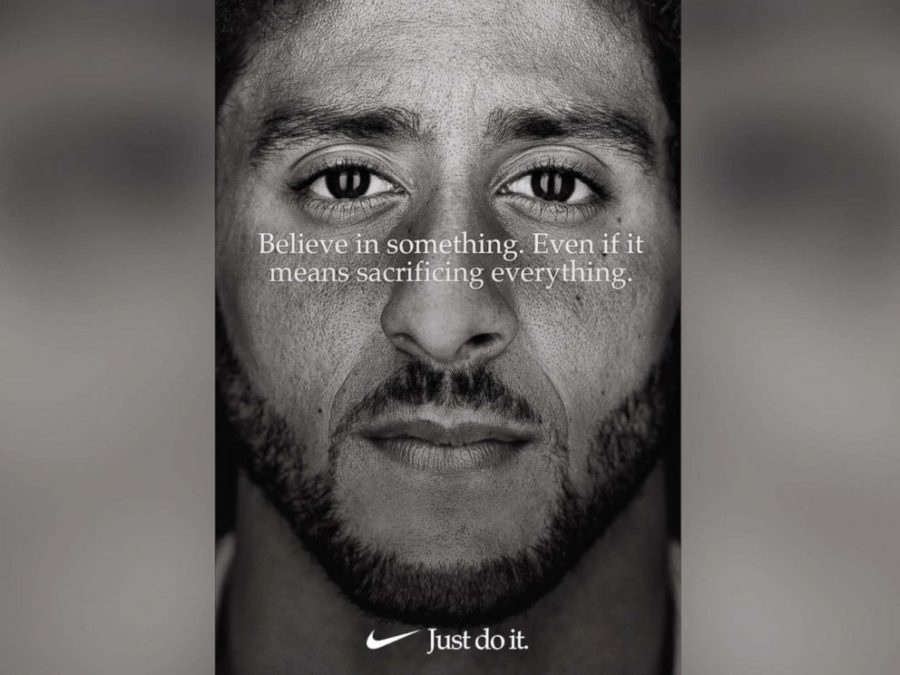 Nike announced on Sept. 3 that Colin Kaepernick, the free agent quarterback who caused major controversy due to protesting during the national anthem at football games, will be one of the faces in their 30th anniversary “Just Do It” campaign.

Kaepernick is seen in a black and white face-shot with the tagline “Believe in something. Even if it means losing everything.”

The tagline perfectly describes what Kaepernick endured since his protest of racial inequality and police brutality towards African-Americans. He began kneeling during the national anthem at football games in 2016, which sparked other NFL players to do the same.

Since Nike’s announcement, the debate is on again in full-swing. This move is also controversial because Nike is signed to make all NFL uniforms until 2028.

Some people reacted to Nike’s announcement by burning their expensive Nike shoes and cutting off logos from the infamous tube socks. At the same time, many have praised the company for its brave move. I am one of them.

I am and will remain Team Kaepernick. While I believe he can take his position and do more to spread the message besides just kneeling, it was at least a start.

As a minority, I have witnessed first-hand the sad reality.

I was pulled over last summer while driving in Tennessee and the first thing the cop said when he approached the vehicle was, “Do you have drugs in the car? Whose car is this? Is it stolen?”

A month ago, I was once again pulled over by a white cop without any explanation. I was too scared to ask for one as there was no one else on the road at that time, so I remained quiet.

Racism is a big issue in this country.

Kneeling during the national anthem does not equal disrespect for me. People haven’t experience the racism minorities face see an easy solution to the problem: Stop kneeling during the flag and “act like an American.” Chants of how great America is are continuously screamed from those who believe we are all treated equally. We are not.

Kaepernick recognized this injustice and used his platform to draw attention to an issue that plagues underrepresented groups of people across the country. His form of peaceful protest started a movement, a movement Nike is supporting.

For privileged white people, it is very simple to tell minorities to love the United States. The reality is that it is not easy to love a country that does not love you.

It is not easy to stand behind a country who voted for a president who calls anyone who looks like me a murderer, rapists and criminal.

I believe the brave men and women who fought for our country fought for our right to freedom of speech and for us to have the ability to protest injustices and advocate for social change.

Martin Fernandez, NEIU student and Marine veteran, said he doesn’t take offense to Kaepernick kneeling during the anthem personally or as a soldier.

“I don’t believe he kneels in spite of service members,” Fernandez said. “He’s protesting the lack of action taken by local and federal authorities for greater social issues.”

However, there is still the belief that Kaepernick can use the attention he received and do more for the cause than just kneeling during the anthem.

While Kaepernick is not offering up a clear solution to the issue, I believe he started and continued the conversation. That’s what is important.

Kaepernick’s protest might not be conducted in the best way for some people, but racism and race injustices shouldn’t be conducted at all. That is the real issue. It is not about a highly overpaid athlete deciding to kneel during a song that was written in 1814.

It is not about football players, it is not about burning shoes. It is about the racism that still plagues this country. If we put half the effort we put into arguing over whether or not you will purchase from Nike into having open discussions about race, we might actually make a positive change.

Naseeb Bhangal, assistant director specializing in race and ethnicity education, is a resource NEIU students should connect with to further more discussions on race and ethnicity. Her office is located in the Angelina Pedroso Center for Diversity and Intercultural Affairs (B-159).