Gibson: Not just a president, a model for students 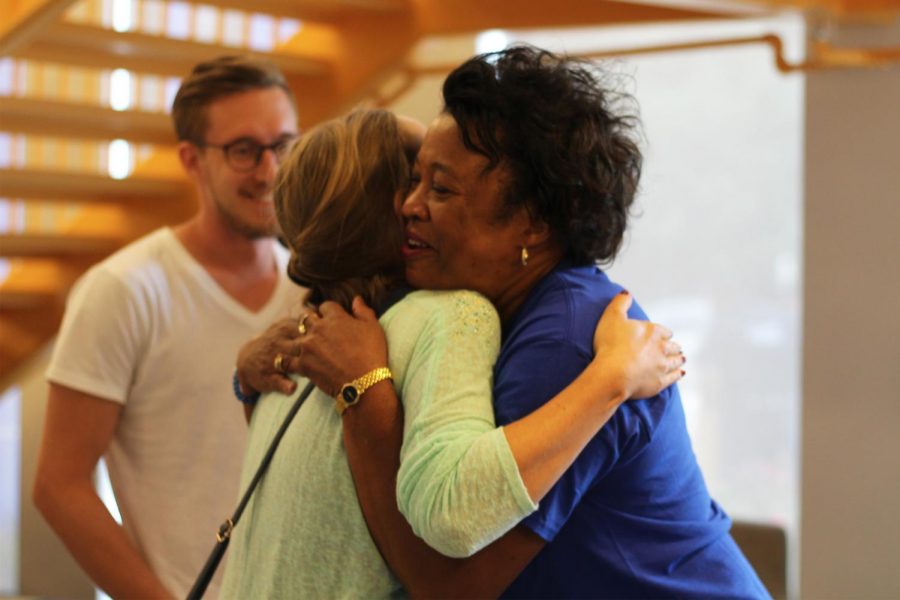 NEIU’s new president, Dr. Gloria J. Gibson, has been planning for the future and being “out and about” to meet with students, staff and faculty.

“I’m very, very proud to serve as the president and I’m equally as excited about my inauguration in September,” Gibson said in an interview with the Independent. “The inauguration is a way for the campus community and the broader community to meet me.”

The inauguration week is five days filled with events and activities such as “Pancakes with the President,” “Jazzy Mondays,” a Daniel L. Goodwin Distinguished Lecture with three-time gold medal Olympian Jackie Joyner-Kersee and more.

The week-long celebration will end with Gibson’s inauguration ceremony on Sept. 13 in the University Commons at 2 p.m.

“There’s a lot of work that takes place in the office, but I can’t be a president that’s solely situation in my office. I really do need to be out and about,” Gibson said.

Gibson said she can’t wait until the students are back on campus and that “a campus is not the same when students are not present.”

Gibson was at move-in day at the Nest, NEIU’s student-housing, helping students move into their new home on Aug. 25.

Gibson is looking forward to her upcoming inauguration, monthly office hour and the Faculty Institute, which are some of the many things she will be doing to better understand NEIU culture.

“To begin to form partnerships and collaborations. Those are also very important things for me to do, to make sure that I’m staying connected with our other locations, El Centro and Carruthers Center,” Gibson said.

Gibson explained that as president, she reports to NEIU’s Board of Trustees and is responsible for all aspects of the institution while working alongside her cabinet and constituents.

“Our goal (is) to become an institution where certainly students in Illinois, they know about us, they want to come to Northeastern,” Gibson said.

As the chief advocate for NEIU, Gibson said one of her duties is to promote “our strengths” and “values that we find very important here at Northeastern.” Gibson said that of all the things she does, the most important is working with the students, faculty and staff.

“I would say that part of what I do is to make sure that students are successful here at Northeastern, that is very, very important to me… When they leave the university, we want to make sure that they are well-prepared to meet the challenges of an increasingly global society. That is my number one goal,” Gibson continued.

Before becoming the president of NEIU, Gibson studied higher education with a concentration in music and folklore. Gibson said music is an important part of her life. She took piano classes as a child, sang in choir in high school and majored in music education at Southern Illinois University Edwardsville (SIU-E) because she “wanted to be a teacher.”

Gibson received a bachelor’s and master’s degree in music education from SIU-E and a doctorate in folklore with a concentration in ethnomusicology from Indiana University Bloomington (IU-Bloomington.)

“My parents migrated to east St. Louis from the south, so I am a first-generation college graduate. My parents really tried to provide for me a very good education, and they realized that I loved music, so they started me with piano lessons and that was always great.”

Gibson said she started off her career as a public school teacher in Alton, Illinois, where she taught music. “Music provided a real foundation for me,” Gibson said.

“At one point, I wondered about my heritage, my music, my culture as an African-American because I hadn’t studied that,” Gibson said.

She said IU-Bloomington provided her an opportunity to study folklore and ethnomusicology. There she learned about the cultural origins of music and folklore, which are values, traditions, storytelling, within her heritage.

“My mom always told stories…  but the story was didactic. Of course, when you’re a nine, 10-year-old kid, you’re just listening to the story, not understanding that the story is told so that you can learn a value, learn a moral, at the end of the story.”

It wasn’t until Gibson went to IU-Bloomington that she understood the values of her mother’s stories.

During her time there, Gibson served as an associate professor in various apartments such as: Afro-American studies; communications and culture; and folklore and ethnomusicology. She was also the director of the archives of traditional music and the associate vice chancellor for the office of multicultural affairs.

Gibson said, “I wanted to find other ways to be impactful in education, so I did make a decision to leave Indiana University to become a dean.”

After five years at Arkansas University, Gibson was hired as the provost and vice president for academic affairs at Northern Iowa University then later at Morgan State for a similar position.

Gibson then explained that as a vice president, the thought of becoming president crossed her mind. “Is it possible to actually lead an institution and to be a president? And for me, as an African-American woman, that was even a greater question and a greater challenge, but one that I was willing to embrace.”

Gibson said, “To be perfectly honest, I applied for several presidencies and I didn’t make it… I think what is important is that there is a lesson there for all of us: sometimes we try and we don’t achieve, but that doesn’t mean that we stop… I certainly believe that if you work hard and you do your very best, you have connectivity to people who can help and support you, because none of us can do it alone… .

“My goal of eventually becoming a university president was achieved and I believe that I achieved it in the best place in the whole, wide world. So, to all of those places who said no to me, that’s fine, because I ended up right where I need to be.

“I am a model for others who can do it,” Gibson said.