Orange Bowl Too Big for the Huskies 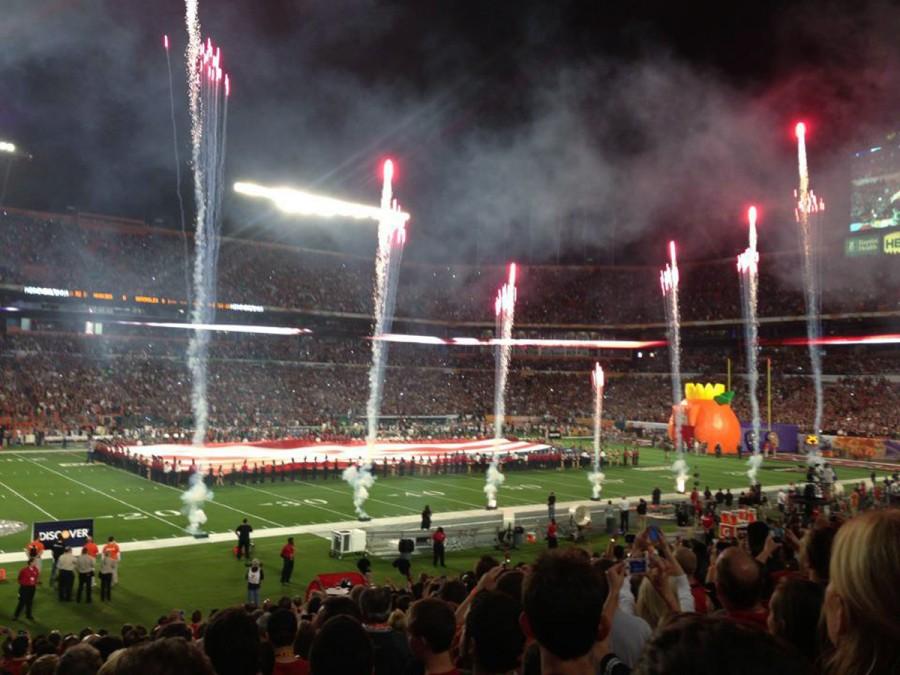 Northern Illinois University’s ability was tested in Discover’s BCS Orange Bowl when they battled the Florida State University Seminoles, the Atlantic Coast Conference Champs. Northern’s Huskies, the Mid-American Conference Champs ranked No. 15 in the BCS standings, demonstrated that they belonged in the bowl after speculated concern all week that they were not good enough. Although they were unable to produce a victory, the Huskies established their school and football program on a higher level.

NIU Huskies beat out No.17 Kent State during a double overtime victory of 44-37 in December to earn their spot in the Orange Bowl. It was the first time in the school’s history they were offered a spot in a bowl game. The Huskies record, 12-1 overall and 8-0 in the Mid-American Conference, beat out Wisconsin and Louisville, who were also competing for the spot in the bowl. University of Iowa, coincidently not offered a bowl invitation, was the only school to beat out NIU early on in the season. It was a special season opener played at Soldier Field in downtown Chicago. The huskies overcame that loss, got their head on straight, and continued to fight to become undefeated.

Unfortunately, Huskies head coach, Dave Doeren, transferred to North Carolina State, leaving the Huskies to fend for themselves. The school announced his replacement, Rod Carry, previously offensive coordinator, to be Doeren replacement effective immediately. The team, who practiced everyday from December 3 on was ready for a fight. Carry had some tricks up his sleeve that he brought out during the game, however it just wasn’t enough. Many missed opportunities by the team, especially by quarterback Jordan Lynch, did not help. The Huskies proved that they belonged in the game by holding on tightly in the beginning, even as they slowly slipped away towards the end.

Four quarters was too much for the Huskies. Although they started out strong, the fight just wasn’t in them. Tommy Lee Lewis for the Huskies received the ball and got a short run in before being tackled. It wasn’t long before the ball was turned over and FSU quarterback Ej Manuel had the ball. Manuel was able to take his time due to the lack of pressure from the Huskie defense, allowing for long passes for big yards. A sloppy fumble for the Seminoles was picked up by the NIU Huskies, however, the opportunity was missed and they turned the ball back over to FSU, who scored with just five minutes left in the first quarter. The Huskies were able to get the ball to the 25-yardline and set up Mathew Sims for a field goal, which at least put the Huskies on the board.

FSU kicker Dustin Hopkins missed a 50-yard field goal attempt for the Seminoles. Now at third and goal with only 15 seconds left in the half, FSU snapped the ball and ran it in for a touchdown. The kick was good making the score 14 to 3 at halftime.

Florida State’s defense was too much for Northern’s offense. They held them back, pressured them, and caused a couple of sacks. Jordan Lynch, however, was able to get a pass through to Akim Daniels who ran to the 37-yardline. Martel Moore received a pass from Lynch and ran it in for the touchdown. Extra point was good, making the score 17-10.

Right after they began to make way, coach Carry decided to do an onside kick and was able to pull it off. This risky play actually worked, giving the Huskies another chance to score a touchdown. Once again the missed opportunities plagued the Huskies, and all they could manage was to get the ball intercepted by FSU’s Terrance Brooks.

To say Florida State dominated the 4th quarter would be an understatement. EJ Manuel started it off running the ball in for a touchdown, making the score 24-10. Then NIU fumbled the ball, FSU recovered it, and Lonnie Pryor ran right up the middle for a 60-yard touchdown on the next play. The extra point was good bringing the final score to 31-10.

Wasted opportunities and not on their best game caused the Huskies to lose the game. The trip down to Miami is, however, still the biggest in the school’s history and something that they players will be talking about for a long time.